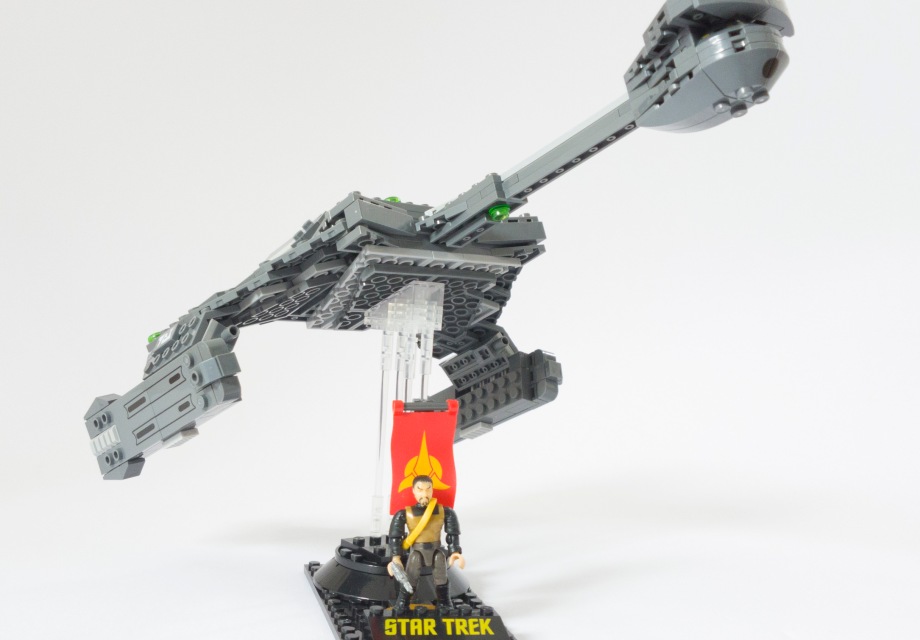 I’ve meant for some time to extend the scope of this blog by reviewing an official LEGO spaceship set. Well brace yourself because my first review is here and… 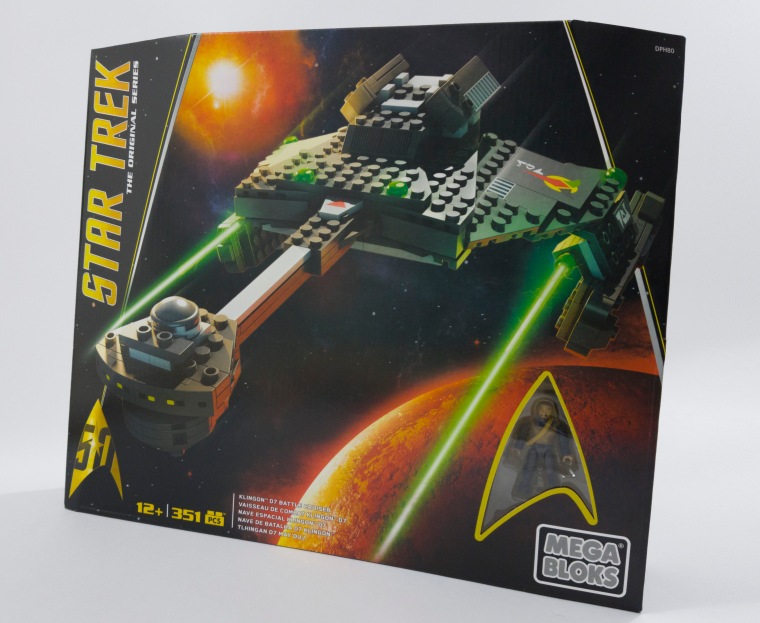 it’s MEGA BLOKS! Join me as I embrace the evil empire…

Remember how last year was the 50th anniversary of Star Trek? Well, the folks at Mega Bloks decided to honour the occasion by releasing a line of sets based on the original series; ranging from a little set of the Guardian of Forever to a big “UCS” style set of the Enterprise for $250.

Let’s just take a moment to let that sink in – Mega Bloks made a set of the Guardian of Forever, a goofy prop from 60’s Star Trek. That’s officially awesome. However, if you didn’t know already, LEGO fans are *really* snotty about “clone brands”; and the presumption is that anything non-LEGO is basically a load of crap. But I’ve had “Klingon Battlecruiser” on my to-build list for some time; so when this finally became available in the UK I scooped it up for £22.99 from Zavvi. 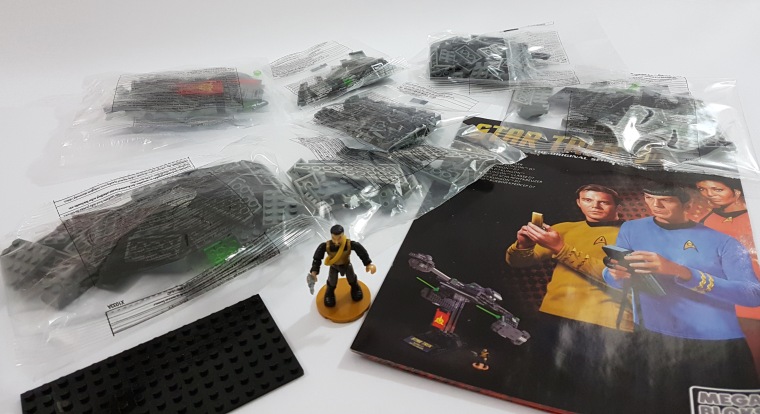 Opening the box reveals 7 un-numbered bags, a loose 8×16 black plate and the instruction manual which is a bit flimsier than you’d get in a LEGO set. The figure was proudly displayed on the front of the box as you saw above, which I actually kind of liked because it reminded me of when you hinged the lid open on LEGO sets to see the bits all laid out inside. 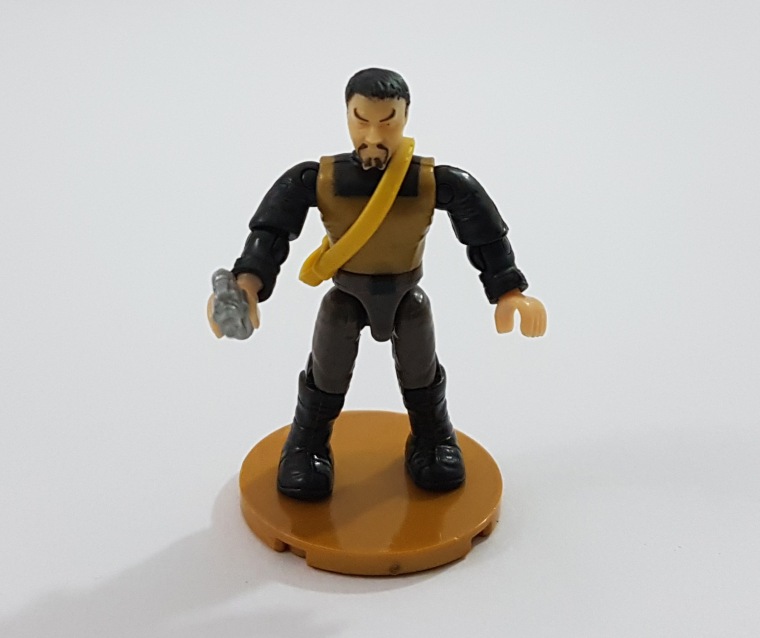 The “Micro Action Figure” is Kor from the classic episode Errand of Mercy. I’m not really into figs, but I once did a voiceover with an actor called Nick Colicos, who was the son of John Colicos who played Kor; so this is pretty cool for me. Be careful when you pull him out of the plastic as I ripped his leg and hand off. Sorry John. 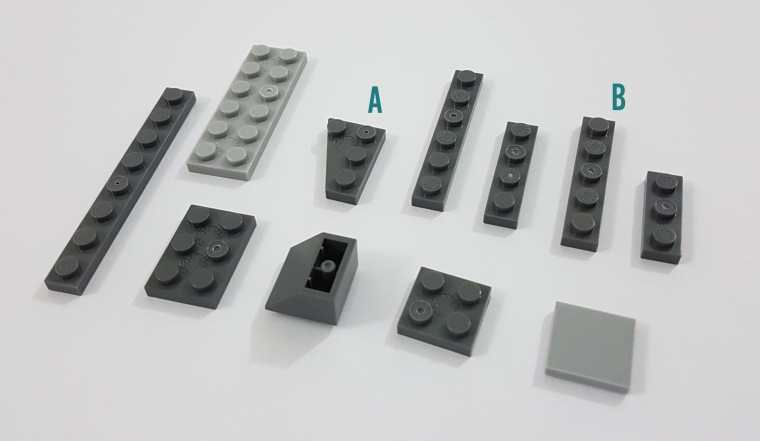 This is my first time with a Mega Bloks set, and I was interested to see how it compares to regular LEGO. As you see above, it’s pretty much business as normal; except there’s no “LEGO” on the studs, there’s “MEGA BLOKS” between the studs and some slightly ugly moulding marks. There’s minor parts differences, like the wing plate ‘A’ which has an extra stud at the top and then – HOLD ON A MINUTE – ‘B’ IS A 1X5 PLATE!!! THAT’S SO USEFUL!!! 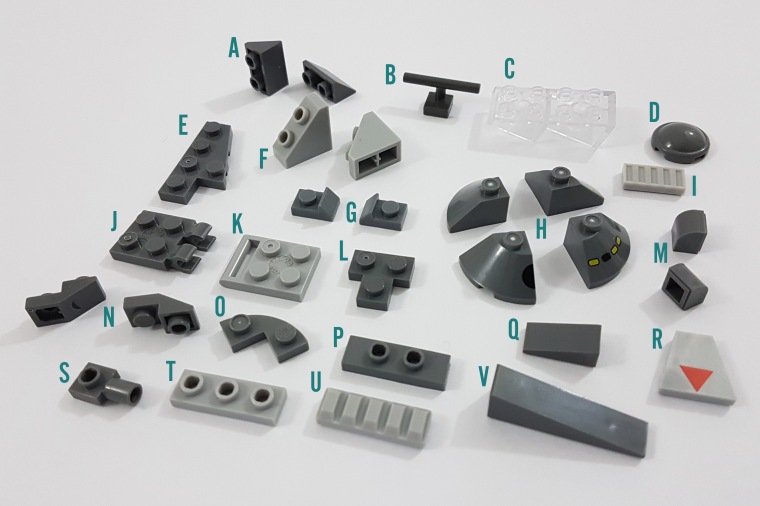 Above are most of the cool bits included, too many to discuss in detail. ‘A’ is 2×2 inverted slope without the flat bit. ‘F’ is a 45° slope with studs on the slope. ‘G’ is a little detail thing like a 1 plate addition to a cheese slope. ‘I’ and ‘U’ are detail tiles with cool patterns. ‘M’ is basically a rounded-off cheese slope. ‘N’ is a 1x2x2/3 inverted slope with a cutout. ‘P’ is a double jumper plate. ‘Q’ and ‘V’ are slopes with no top stud, like a cheese grater with no texture. Note ALL the pieces like ‘H’ and ‘R’ are printed, there are NO stickers; and the print quality is top notch. 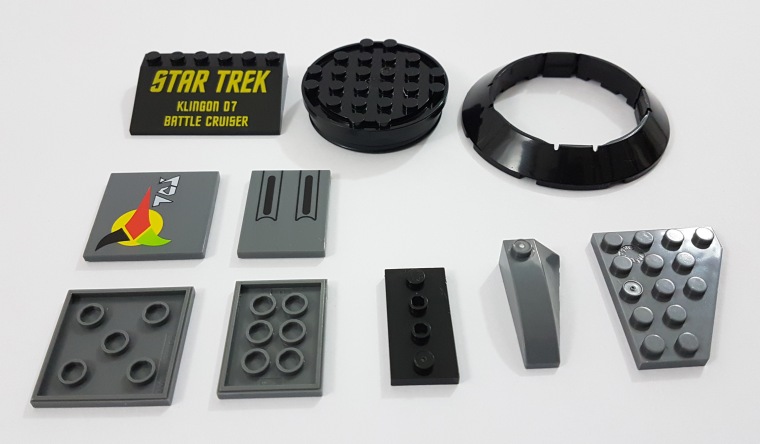 Bigger bits are shown above including 4×4 tiles and 4×3 tiles. Again, everything is printed, no stickers. 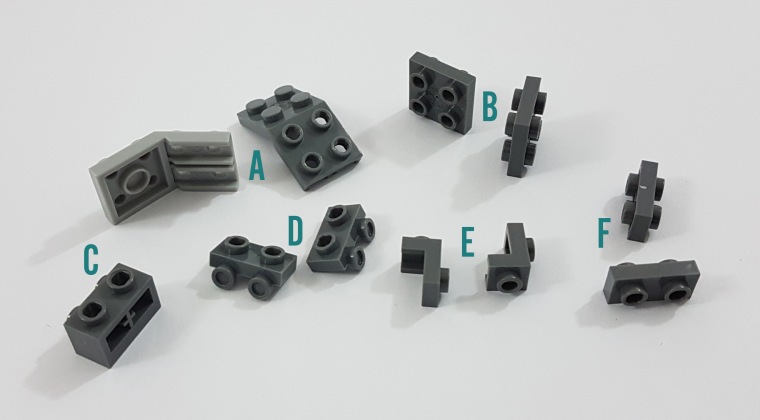 It’s here things get really interesting. Above are the new SNOT pieces, useful for Studs Not On Top building. ‘A’ is a kind of 30° (I think) bracket, in light and dark grey. ‘B’ and ‘F’ are plates with studs on both sides. ‘C’ is a 1×2 brick with 2 studs on the side; except with a stud-hole cutout on the back like a headlight brick. ‘D’ is basically a 1×2 plate with studs kind of hanging off, to be used exactly like a 1×2 brick with 2 studs on the side, but only a plate thick. ‘E’ is basically a 1×1 bracket, except unlike LEGO the protruding bracket part is a whole plate thick, not a 1/2 plate. 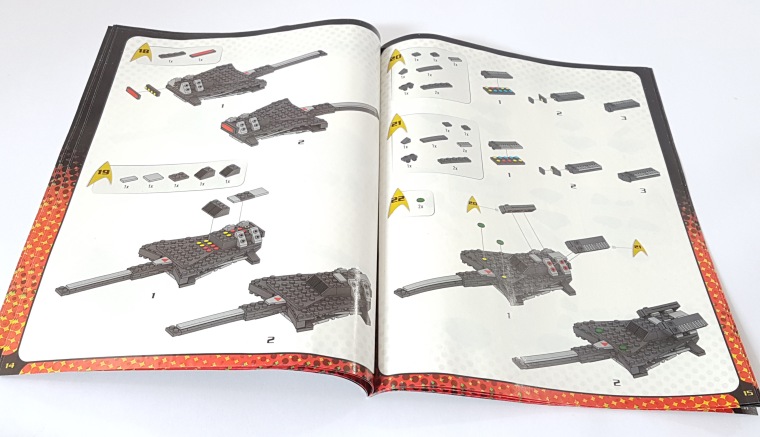 I was pretty blown away with HOW MANY cool parts there are in this set, and quite jealous they’re not available in official LEGO.  However, in fairness the construction is actually quite unremarkable and certainly doesn’t utilise the cool parts in anything like their full potential. Random instructions page above, and you can download the instructions from Mega Bloks. The main body is just a solid slab of plates (and does stuff like use 3 4×2 plates rather than 1 4×6, like parts cost nothing to make…) and only the head and wings are really of interest. 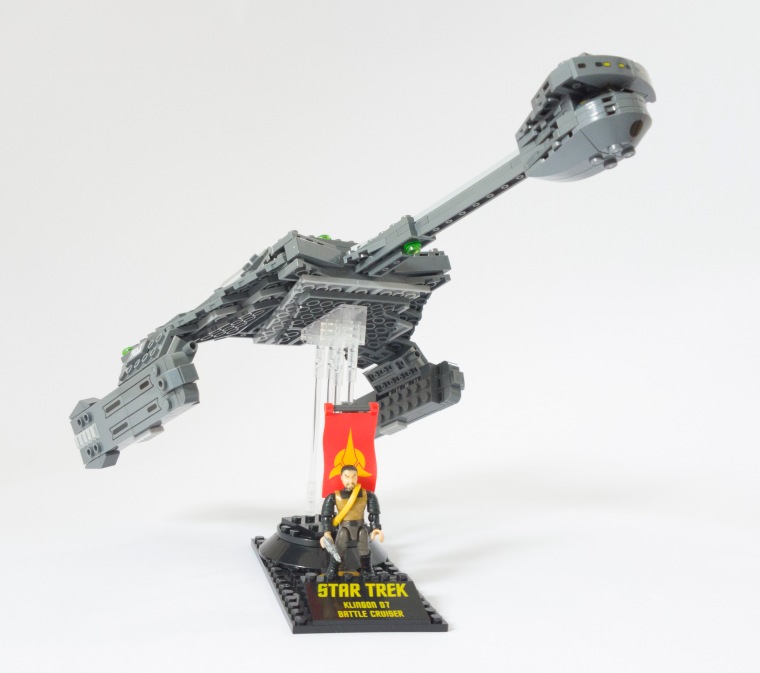 Behold the finished model. The 2×2 and 2×1 plates with studs on both sides are used on the warp drives to put tiles on both sides, so they look nice and slick; and on the “head” to put those round slopes on the bottom. The small wedges and slopes are used to give some nice shaping and add details, but it’s an un-apologetically studdy model overall.

It’s also dark grey with random light grey highlights; whereas in my mind the “real thing” is green (and indeed is shown as such on the back of the box…) although I think the real colour is a matter of debate and much affected by the vaguarities of 1960’s special effects. You can’t deny however they’ve totally nailed the shaping and it’s got the imposing stance of the original and is instantly recognisable and very swooshable. 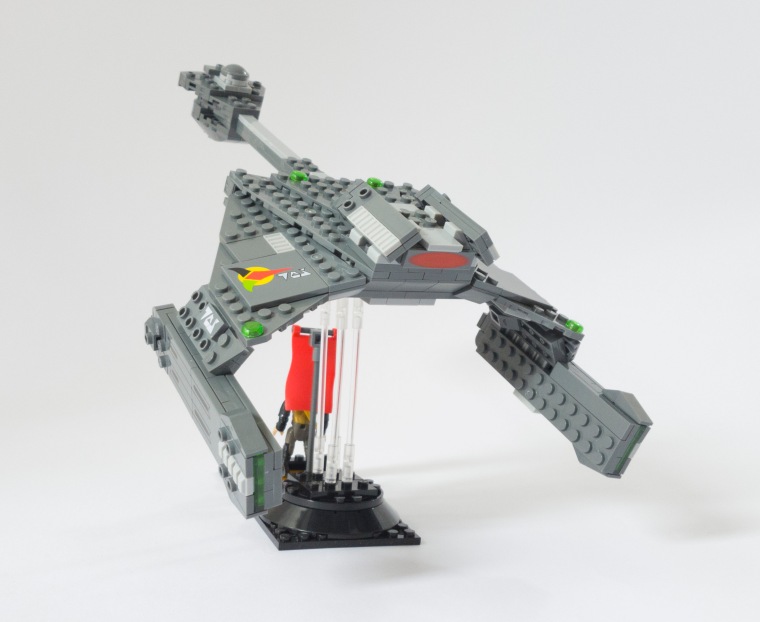 At £22.99 for 351 pieces by LEGO standards it’s a bargain. The allegation that all clone brands are a load of crap is clearly false as this is of a very high standard and entirely fit for purpose. The new pieces are pretty appealing and frankly I won’t waste much time in using them in my LEGO MOCs when I disassemble this (in fact if BrickLink sold Mega Bloks pieces I’d probably buy more). Overall I take my hat off to Mega Bloks for helping celebrate the 50th anniversary of Star Trek with a really great line of sets and giving me a microscale model of this iconic spaceship. If Anyone at Mega Bloks is reading this and wants to send me the Enterprise set to review I have no problem with that at all!